Homepage Charity Almost half of UK charities for world's poorest set to close in a year – survey
Charity, Education

Nearly half of the UK’s small charities working with the world’s poorest people expect to close within the next 12 months due to lack of financial support, a survey has found.

Despite most of them seeing a spike in demand for their services during Covid-19, 15% of the charities will be forced to shut their doors within the next six months, and 45% within a year, according to data from the Small International Development Charities Network (SIDCN).

The pandemic – predicted to force one in 10 UK charities into bankruptcy by the end of 2020 – has delivered a triple whammy to smaller overseas charities, according to SIDCN. British charities working abroad have not been eligible to apply for the UK government coronavirus community support fund, and many British funders have amended their giving criteria to donate to projects based solely in the UK.

The Department for International Development (DfID)’s merger with the Foreign Office and the subsequent £2.9bn cut to the 2020 overseas aid programme have left little room for small charities to function, said CEO Rita Chadha of the Small Charities Coalition, which supports more than 100 small NGOs.

“There are over 10,000 small international charities with an income of under £1m in the UK,” said Chadha. “Their work rarely gets noticed beyond those that they directly work with, but their impact is huge. Helping young girls get an education, providing micro grants for businesses, and investing in clean drinking water is what makes us collectively safer and better. Covid-19 has proven we can no longer afford to think just local.” 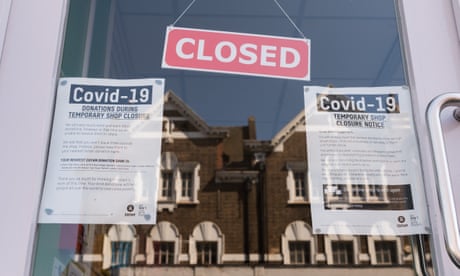 The findings echo financial woes at the fundraising charity Comic Relief, where one in four staff are facing redundancy and more than £5m running costs needed to cope with fallout from the pandemic, according to Third Sector.

SIDCN, which surveyed 53 small charities/nonprofits working overseas with a maximum annual income of £1m, found that 72% had seen an increased demand for their services during the pandemic, with 57% having had to postpone programmes or projects.

“The lack of any support for international charities has been debilitating,” one charity head told researchers.

“We have had to close the office and cut staff and staff hours but the demands on our now-reduced team have only increased. The amount of funding for immediate partner Covid needs is paltry,”

Murielle Maupoint, of East African Playgrounds, which has built more than 350 playgrounds and helped improve education for more than half a million children in Uganda, said that the charity had seen “95% of its funding disappear overnight” .

Another charity in Uganda, Kids Club Kampala, which supports vulnerable children in slums, had toconvert classrooms into food banks to help with emergency food needs. Despite initially expecting to feed 1,000 families, they have so far fed 27,821 households with more than 600,000 food parcels, and have been asked by the Ugandan government to expand provision, said the charity’s CEO Olivia Barker White.

“There has never been a greater need in Kampala for our services,” said Barker White, citing concerns over the potential long-term effects of lockdown such as child abuse, domestic violence, and mental health and family breakdown.

“We desperately need to raise more funds to ensure we can provide support to those who need it most.”

Sophia Moreau of the Small Charities Coalition said that losing half of the UK’s charities overseas would have a devastating effect on global development. “Small international charities may be small, but they have a huge impact,” said Moreau.

“They are often the ones building the relationships on the ground with local partners and there won’t be anything to fill those gaps if they are forced to close down. Even the big international organisations are facing redundancies and cuts, so there will be a void where these small ones once were.”

The Government will boost the fundraising efforts of funders and...